It's finally here! Dustforce DX is a free update to Dustforce with new content and community-made maps. It also is now playable right in your browser. We've also restructured the game world to be more accessible to newer players - you can read about our intentions with these changes in this article.

What is Dustforce DX? It's an update to Dustforce, and is free to everyone who already owns the game on the desktop. If you play the game on Steam, it should automatically update with the new DX content. Dustforce DX is the definitive and current version of the game.

We've added 109 maps made by the Dustforce map-making community, and put them in their own in-game terminal. This gives the community a huge group of new official maps to compete on. Who will challenge Thor for the first-place spot on the classic Acropark 2?

There's also a new music track in the game, by Lifeformed. For Steam users, we're also releasing Steam trading cards, badges, wallpapers, and emoticons. Collect them all by playing the game on Steam, trading with friends, and participating in the marketplace! 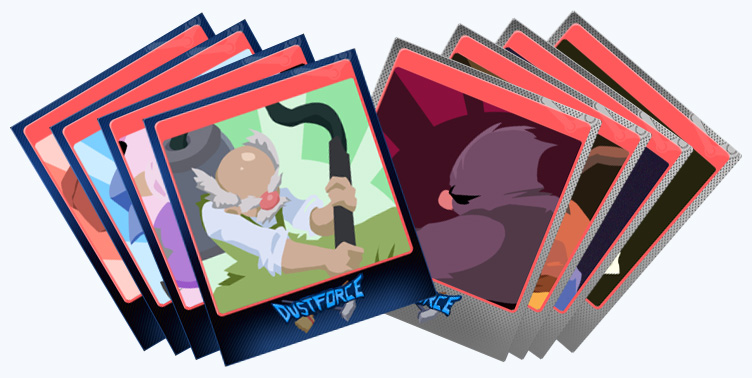 The final big update is that we have made the game a bit more accessible to new players.

A friendlier start to sweeping

Dustforce is a tough game. It was our intention from the beginning to push the skill ceiling sky high, so we can see just how much players push themselves to be masters at the game. We're still constantly in amazement when we see top players pull off amazing runs. However, as we watched more new players pick up the game, it was sad to see them get stuck early on and give up. We realized we were just filtering out all but the most hardcore players. Ideally, we should be converting normal players into hardcore players.

The learning curve to the game is quite steep - you're given a tutorial, then thrown into the deep end. We've always wanted to redesign the structure of the game to ease new players into the harder levels, but we've been too busy working on our next game, Spire, to make it happen. However, we've finally found some time, and now we've made some changes that will hopefully make the game friendlier to new players.

We gathered some data over the past two years from the Dustforce leaderboards. In the following graph, you can see what percentage of players have completed a certain number of levels. 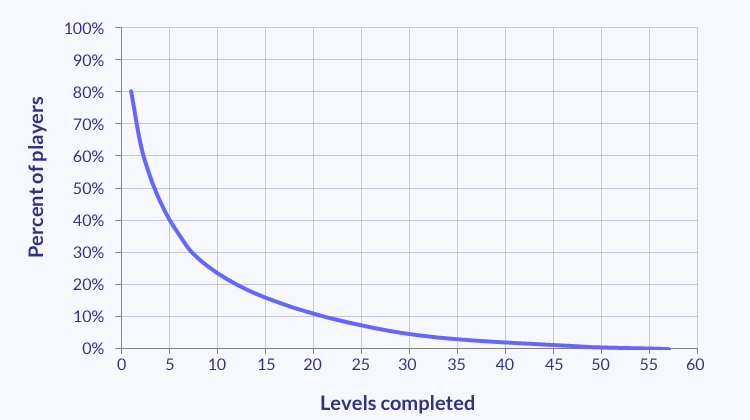 Some facts stand out immediately - almost 20% of players stopped playing after just one level, and over half of all players quit after just completing four levels. Of course, a high number of dropouts is to be expected, due to the number of games fighting for players' attention nowadays, but surely there must be a way we can smooth out that curve a bit.

In the Dustforce DX update, we're trying to alleviate this by consolidating all four regions - forest, mansion, city, and lab - into one large area. Before, players felt like they had to beat a whole region first before moving onto the next. This meant they only had four easy levels to practice on before having to tackle the tough ones (and remember, over half of the players quit after completing four levels). By combining all the regions in one map, we are able to guide players towards all of the easy levels first, regardless of region.

How do you get up there? Once you figure it out, you will be ready for the levels up there.

To reinforce this, we made it harder to reach the tougher levels. We gated off the medium and hard doors by making them reachable only by a difficult jump or technique. The hardest doors have even tougher entry requirements. This helps in two ways: it keeps new players away from levels they aren't ready for yet, and it serves as a teaching tool for more advanced techniques that are required in the tougher levels.

Lastly, we've added 16 new levels to the game. We noticed that even the easy levels were quite hard for new players, so we made a new tier of easier levels that unlock the old easy levels. In addition to this, we've broken up the tutorial into 3 separate maps. This means the player can spend a bit more time working on each technique.

Hopefully these changes will ease players into Dustforce more gradually than before. We wanted to make the game more accessible without lowering the skill ceiling - rather we are just smoothing out the beginning of the difficulty curve.